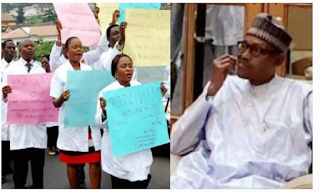 “The striking doctors are enjoying the sympathy of the general public,” said chairman of NMA Enugu branch, Jude Onyia. “The National Executive Council of the NMA will be meeting on Wednesday, in Benin, where we hope to discuss the strike extensively. But the federal government must withdraw the suit against NARD.”

The health and labour ministries had approached the National Industrial Court through an ex parte motion praying for an order of interlocutory injunction restraining resident doctors across the country from continuing the strike that began on August 2.

He added that Mr Buhari’s regime also must withdraw a circular by the head of service removing house officers and NYSC doctors from the scheme of service.

For a harmonious settlement to be reached, dialogue is the only answer,” Mr Onyia added. “Resident doctors have remained the main professional workforce in tertiary health institutions in the country. They constitute over 50 per cent of the workforce.”

He lamented the N5,000 paid as hazard allowance to doctors.

“The government and entire nation have to rally round our doctors to check their exodus from the country, which portends more danger for the health sector and well-being of the entire citizens,” he warned. “If the current number of doctors still giving service in the country, is further reduced, it will surely tell on the health system of the country and the burden will be enormous.