Tearful Messi confirms departure from FC Barcelona, says not ready for it - The Naija Weekly

Tearful Messi confirms departure from FC Barcelona, says not ready for it 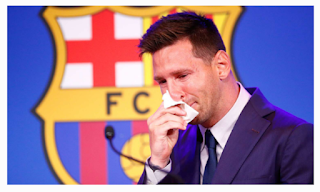 Lionel Messi was in tears on Sunday as he confirmed his departure from Spanish side FC Barcelona after 21 years with the club.

Messi was set to sign a new deal with the club, but is now heading for new pastures – possibly Paris Saint-Germain (PSG).

This was after the Catalan giants could not afford to fulfil the contract they had agreed.

The 34-year-old took to the stage for a news conference on Sunday, in front of the media, his family, Barca teammates and club officials.

He was emotional before he even made an opening statement, as he revealed he had never imagined a moment when he would have to leave Camp Nou.

“These recent days I’ve been giving lots of thought to what I could say, and the truth is that I can’t think of anything,” said Messi, who subsequently let the tears flow as he received a standing ovation.

“This is really difficult for me after so many years, being here my entire life.

“I’m not ready for this and honestly last year, with all the nonsense with the burofax, I was convinced I knew what I wanted to say. But this year is not the same.

“My family and I were convinced I wanted to stay here, that’s what we all wanted more than anything. We thought we’d be staying here in Barcelona, (but) today I have to say goodbye to all of this.

“We’ve always made this our home, we’re at home and we thought we’d be staying here in Barcelona.

“The time we’ve had here in the city and the sport has been amazing, but today I have to say goodbye to all of this,” he said.