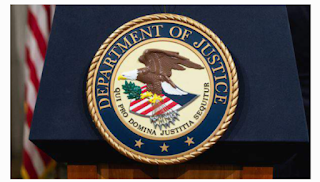 Two Nigerians, Johnson Ogunlana and Samson Oguntuyi, face up to 105 years in a U.S. prison after pleading guilty to bank and mail fraud conspiracy and other related charges.

Though District Judge Catherine Blake has not scheduled a date for sentencing, Messrs Ogunlana and Oguntuyi pleaded guilty on Monday, ahead of the trial, to federal charges of schemes to defraud financial institutions and businesses.

The duo used the stolen personal information of individual victims.

The pleas were announced by acting United States Attorney for the District of Maryland Jonathan Lenzner.

In their plea agreements, Messrs Ogunlana and Oguntuyi noted that between July 25, 2016, and February 5, 2019, they agreed to steal bank checks and credit and debit cards from the mail and run fake businesses using stolen identities.

Both parties agreed that at least $565,000 was stolen from two victim businesses and eight identity theft victims.

They also face a mandatory sentence of two years, “consecutive to any other sentence imposed, for aggravated identity theft.”