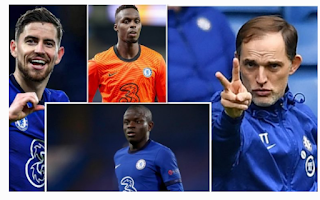 The awards were presented to winners at the UEFA Champions League group stage draw held in Istanbul Turkey on Thursday.

Tuchel who led Chelsea to UCL victory barely four months after he took over from Frank Lampard emerged UEFA Men’s Coach of the Year.

With 9 clean sheets in 12 matches, Senegalese Goalkeeper Edouard Mendy, 29, emerged Goalkeeper of the Season for the 2020/21 UEFA Champions League.

Jorginho won UEFA Men’s Player of the Year while French international N’Golo Kanté takes the award for UCL Midfielder of the Season for his brilliant performance for the Blues last season.