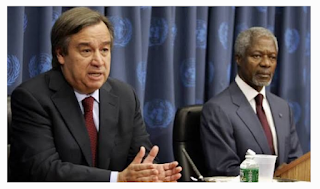 Stephane Dujarric, the spokesman for the Secretary-General, remembered the late global icon at a news conference at UN headquarters in New York on Wednesday.

Mr Dujarric told press people at the conference that “as some of you know, today marks three years since we lost Kofi Annan, our former secretary-general.

“As the current secretary-general said, Kofi was both one-of-a-kind and one of us, a man who embodied UN values and made all of us proud to call ourselves his colleagues and friends. We remember him today and every day.”

Also, the spokesperson said Deputy Secretary-General Amina Mohammed said that on this day three years ago, the world lost one of its ‘moral voices’.

Born in Kumasi, Ghana, on April 8 of 1938, Kofi Annan was the seventh Secretary-General of the UN, serving from 1997 to 2006, and was the first to emerge from the ranks of United Nations staff.

As secretary-general, one of Annan’s main priorities was a comprehensive programme of reform aimed at revitalising the UN and making the international system more effective.

He was a constant advocate for human rights, the rule of law, the Millennium Development Goals and Africa, and sought to bring the organisation closer to the global public by forging ties with civil society, the private sector and other partners.

At Annan’s initiative, UN peacekeeping was strengthened to enable the organisation to cope with a rapid rise in the number of operations and personnel.