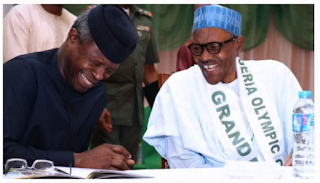 Vice President Yemi Osinbajo says it will “just wasting a lot of time” if Nigerian leaders are not willing to make sacrifices and risk their popularity to attain lasting solutions in violent conflict, including ethnic and religious tensions.

“Unless we are prepared to not just talk about it but to make an open display, first of all, of those who are doing the right things,” Mr Osinbajo argued. “But more importantly, challenging our leaders to say the right things and to be prepared to risk some popularity in order to do so, then we will just be wasting a lot of time.”

Laolu Akande, Mr Osinbajo’s media aide in a statement on Monday, quoted the vice president to have said on Monday when he received a delegation from the Muslim Public Affairs Centre (MPAC) led by its executive chairman, Disu Kamor, in Abuja.

MPAC is a non-governmental organisation dedicated to promoting peace-building and interfaith cohesion.

Mr Osinbajo explained that “there is a need to understand first of all, that there is no way that we can deal with the tensions between the faiths and ethnicities in Nigeria today unless those in leadership are prepared to make some important sacrifices.”

He cited the example of the late South African President Nelson Mandela and Abubakar Abdullahi.

Mr Abdullahi (an imam), in 2018, put his life on the line to save over 200 Christians who took refuge in his mosque when some gunmen attacked Nghar Yelwa in Barkin Ladi, Plateau, and sought to kill Christians.

“It is very important that we don’t diminish the importance of language and respectful non-violent communication so that we are able to keep our discussions at a level that ensures that we don’t degenerate too quickly to violence,” Mr Osinbajo added. “These are stories of people who are not only political or religious leaders but just ordinary people, doing the right thing.”

He suggested to MPAC’ to include youths in its activities.

“I think it is something that is important, especially one that takes into account younger people, professionals who are not necessarily religious leaders in that sense. Maybe there might be a way to have a more inclusive interfaith dialogue.”