Why Buhari has not proscribed bandits like Nnamdi Kanu’s IPOB: Garba Shehu - The Naija Weekly

Why Buhari has not proscribed bandits like Nnamdi Kanu’s IPOB: Garba Shehu 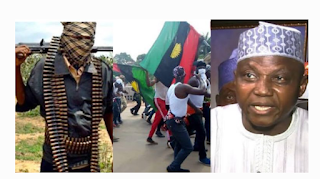 Garba Shehu in an interview with BBC Pidgin on Friday says President Muhammadu Buhari has not proscribed bandits like it did the Indigenous People of Biafra (IPOB) because there is a subsisting shoot on sight order against armed bandits and other violent groups.

“What the Buhari administration has done to the arms-wielding bandits is worse than being declared as terrorists. Do you know that there is a subsisting order by the President that any arms-wielding, AK-47 bandits should be shot on sight,” Mr Shehu said.

Mr Shehu further argued that Mr Buhari regime was not giving bandits any form of preferential treatment as they are being killed in their hundreds.

“I am saying yes, IPOB has been prescribed by law of the land. There is no shoot-on-sight order on IPOB. There is nothing to suggest that these bandits are treated preferentially,” he said.

In recent months, bandits in coordinated attacks have killed and abducted hundreds of school children for ransom in Kaduna, Katsina, Niger and Zamfara State, forcing schools to shut down in some of these states.

In July, bandits shot down a Nigerian Airforce jet, eliciting much condemnation from citizens who described their nefarious activities as act of terrorism.

When further asked why bandits who have done more harm compared to the proscribed IPOB were still not declared terrorists by Mr Buhari regime, Mr Shehu said “Yes, we hear that a lot of times. But I want to say I disagree with that position.

“The Nigerian Airforce is busy bombing locations in the forest, the military is there on the ground exchanging fire and taking them out in hundreds, that is certainly not treating people lightly.

“Well, I am not suggesting bombing IPOB or anybody. I want to say that the entire weaponry is today targeted at these bandits and terrorists,” Mr Shehu said.

Amnesty International had in 2016 reported how the Nigerian military extrajudicially killed at least 150 peaceful pro-Biafra protesters in South-East Nigeria.

In 2017, Mr Buhari proscribed IPOB a terrorist group for calling for self determination. The leader of the group, Nnamdi Kanu, was recently abducted in Kenya and brought back to Nigeria to face trial.