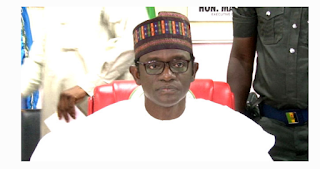 Abdullahi Bego, the Commissioner for Home Affairs, Information, and Culture, disclosed this on Thursday.

Addressing journalists in Damaturu, Mr Bego stated that the governor took the decision after consulting relevant stakeholders, including officials of Yobe’s 17 local councils.

“Given the nature and scale of the situation at hand, the first and natural impulse would be to say ‘let’s retrench some of the workers or downsize the workforce to be able to handle the fat salary bill’,” the commissioner explained. “But, the administration of Governor Mai Mala Buni has refused to contemplate that idea.”

The governor did not want workers to lose their jobs because of the prevailing economic hardship, Mr Bego added.

He further noted that following the global economic downturn that affected the state, Mr Buni set up a committee to find alternatives to sacking workers.

The committee recommended a review of the minimum wage of local government employees to N20,160 across all grade levels, the commissioner told the journalists.

“This is why here in Yobe state, salary payments are the first-line charge from government revenue receipts,” said the commissioner. “This means that at the end of every month, the state government would first pay the salaries of workers before undertaking any other expenditures.”