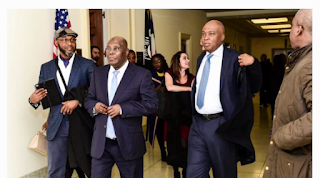 Nigerian opposition leader Atiku Abubakar paid $16.5 million (N8.7 billion in today’s parallel conversions) to an American firm to help him destroy his opponent’s campaign message and procure a visa to Washington in the run-up to the 2019 presidential vote, according to disclosure filings seen by Peoples Gazette, bolstering a long-held presumption that Nigerian electioneering was becoming more expensive to run even before illicit payments to electoral officers and voters are factored in.

Amongst other campaign ideas, Mr Cumber and his team accepted the $16.5 million deal to help the former Nigerian vice president lobby American politicians and bureaucrats for a visitor’s visa, coordinate advanced communications of his campaign and help build a structure tasked with the “destruction” of opposition messaging, according to the contract seen by The Gazette as part of compliance with the provisions of U.S. Foreign Agents Registration Act.

The deal was signed on October 26, 2018, three weeks after Mr Abubakar clinched the presidential nomination of the opposition Peoples Democratic Party to challenge President Muhammadu Buhari in the February 2019 elections. 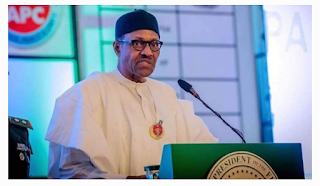 But the filings said Mr Cumber had contacted top Washington lobbyists Holland & Knight no earlier than September 20, 2018, seeking their services in helping Mr Abubakar procure a visa to the U.S.

Holland & Knight charged Mr Cumber $75,000 for the contract and promptly dispatched its personnel to liaise with Republican members of the U.S. Congress, as well as representatives of White House National Security Council and the State Department.

Mr Cumber, an influential Republican and ally of former President Donald Trump, started preparing his team for a trip to Abuja to meet Mr Abubakar’s campaign shortly after the deal was signed and the visa was all but guaranteed, The Gazette learnt.

It was unclear how much Mr Cumber charged Mr Atiku for the visa alone as part of the $16.5 million campaign strategy deal. A spokesman for his firm did not immediately return a request seeking comments from The Gazette on Tuesday night.

The contract said the agreed sum was exclusive of Mr Abubakar’s flight and accommodation to the U.S. and security and logistics for Mr Cumber’s team on their trip to Nigeria — indicating that the Nigerian politician paid out of his pocket when his entourage stayed at the Trump International Hotel in Washington during the trip.

In the contract agreement, Mr Cumber asked Mr Abubakar’s campaign to pay $16.5 million into an escrow account. The money would be depleted in three tranches at every milestone of the three phases of the project.

“The Escrow Agent shall disburse the Escrow Fund as follows:

“a) Five Million, Five-Hundred Thousand and NO/100 Dollars ($5,500,000.00) shall be disbursed by Escrow Agent from Escrow Fund to Firm immediately upon confirmation that the travel VISA for Mr. Atiku Abubakar has been issued by the United States government;

“b) Eight Million, Five-Hundred Thousand and NO/100 Dollars ($8,500,000.00) shall be disbursed by Escrow Agent from Escrow Fund to Firm immediately upon shipment of the book by Firm and release of the Op-Eds by Firm.

“c) Remaining Two Million, Five-Hundred Thousand and NO/10G Dollars ($2,500,000.00) shall be disbursed by Escrow Agent from Escrow Fund to Firm thirty (30) days before the currently announced Election Day in Nigeria of February 16, 2019. This date shall not change even if Election Day is postponed.

“Funds may also be disbursed in accordance with the joint written instructions signed by both Firm and Client. On disbursement of all of the Escrow Fund, this Escrow Agreement shall terminate,” the contract said.

The contract was scheduled to last between October 2018 and January 2019, when the last $2.5 million was slated to be released from the escrow account. It also included a clause that said any postponements of the election will not affect the disbursement of the $16.5 million as scheduled in the agreement. The election was indeed shifted from February 16, 2019, to February 23, 2019.

The deal underscored how expensive Nigerian presidential elections have become over the past decade, and how politicians continue to contract foreign strategists to help direct their campaigns. In 2015, Mr Buhari’s APC awarded a similar contract to AKPD Message & Media, a strategic communications outfit headed by David Axelrod, who directed President Barack Obama’s presidential campaign in 2008 and 2012.

The amount appeared to have been drawn from Mr Abubakar’s formidable campaign war chest and did not include other electoral expenses locally, including ad buys across traditional and digital media.

Nigerian politicians are also known to pay heavily to secure their parties’ tickets at the primaries, advance illicit payments to electoral officers and induce voters at the ballot box.

Mr Abubakar has carried a burden of corruption perception since he was accused of laundering about $40 million by the U.S. Senate in a 2010 probe. The probe uncovered how Mr Abubakar used his wives to launder the funds, including about $1.7 million in cash bribes from German technology giant Siemens. Siemens pleaded guilty to the charges in 2008 and paid about $1.6 billion in fines.

The main opposition chieftain was also named as an accomplice in a multinational bribery scandal of a broadband contract that sent his Democratic ally Jefferson to prison in 2005. Mr Abubakar denied all allegations of corruption and has not been formally convicted of graft, but the U.S. nonetheless found him unworthy of its visa and blocked him from getting one for years.

Mr Abubakar said in interviews that he applied for a U.S. visa repeatedly but was denied on administrative grounds, which consular officers did not elaborate.

But as his opponents were preparing to use his inability to enter the U.S. owing to unclear corruption claims, Mr Abubakar pinned his hopes on Mr Cumber’s steep ties across Washington, which paid off when he arrived in Washington on January 17, 2019, for the first time in over a decade, thereby crossing a major political hurdle that has haunted him for years.

Mr Cumber agreed to, as part of the deal, help Mr Abubakar write a book outlining his vision for Nigeria, hold talks with key players at the World Economic Forum in Davos, conduct opposition research and SWOT analysis of his ambition.

A campaign insider told The Gazette that Mr Cumber and his team helped put together the structure of his campaign, as well as the strategy document he launched in the run-up to the election. Still, it remained unclear whether the agreement was implemented in its entirety, especially as Mr Abubakar did not appear to have launched any book before the election.

A spokesman for the former vice president did not return requests seeking comments about the contract.

Mr Buhari was declared the winner of the election amidst condemnation from election observers and protests from Mr Abubakar. The opposition leader argued the election was rigged after ruling party agents broke into the electoral commission’s database and changed votes, but lost at the tribunal and the Supreme Court.