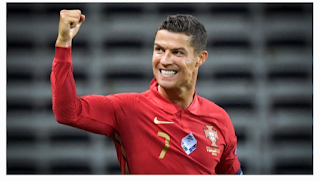 Cristiano Ronaldo claimed a scoring world record on Wednesday when his late brace, after missing an early penalty kick, gave him a tally of 111 international goals.

The brace lifted Portugal 2-1 over Ireland in a 2022 FIFA World Cup qualifier in Faro.

The 36-year-old Ronaldo broke a tie on 109 goals with Iran’s Ali Daei with an 89th-minute header into the bottom right corner for the equaliser.

He then also nodded in the winner six minutes into stoppage time.

Ireland led from John Egan on the stroke of half-time, but Ronaldo’s brace then put Portugal top of their qualifying group with 10 points.

They are now three points clear of Serbia, who were not playing on the night.

Ireland suffered a third defeat in as many games and are on zero points alongside Azerbaijan, which lost 2-1 in Luxembourg.

Only the group winners advance directly to the 2022 finals in Qatar.

“I’m so happy, not just because I beat the record, but for the special moment that we had. Two goals at the end of the game is so tough. I have to appreciate what the team did. We believed until the end. I’m so glad,” Ronaldo said.

Ronaldo, whose transfer from Juventus to his former club Manchester United was completed on Tuesday, was playing in his 180th international.

Ronaldo tied with Daei at the recent Euro 2020 tournament, thanks to a brace against France. He did not score again there as Portugal went out 1-0 in the next game against Belgium.

He became the first man to score at five Euros at the tournament, the all-time event top scorer with 11 goals, and Euro 2020 top marksman with five goals.

He scored his first Portugal goal at Euro 2004 in a 2-1 defeat against Greece.