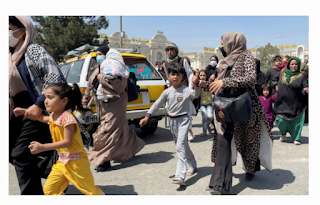 Melissa Fleming, head of communications and chief spokesperson for the United Nations High Commissioner for Refugees (UNHCR), says with the return of Taliban rule to Afghanistan, many Afghan women are desperate to leave the country.

“Fearing a return to the dark days, many Afghan women are desperate to leave. Only a fraction will succeed, leaving millions at the mercy of the new regime,” Ms Fleming said.

Ms Fleming, who stated this on Friday in an article titled Why we will continue to press for educating Afghan girls said the dreams of millions of Afghan girls could be in jeopardy due to the recent takeover by the Taliban.

She said that Afghan girls’ access to education will be adopted as a key indicator in assessing the Taliban commitment to human rights.

“The Taliban has made statements in recent days pledging to uphold the rights of women to work and of girls to go to school. The world is watching closely.

“Girls’ access to all levels of education will be taken as a key indicator of the Taliban’s commitment to human rights. And as UN rights chief Michelle Bachelet has warned, those and other hard-won women’s rights are “fundamental red lines,” not to be crossed,” she said.

Reflecting on the misrule of the Taliban government between 1996 and 2001, when women and girls were denied education, the UN spokeswoman said the world could not afford to have an Afghan government that would ban girls and women from studying.

She restated the United Nations commitment not to stop supporting Afghan girls’ education, one that has been on for over a decade since 2004 when a new constitution laid down the right to free education for all citizens, women inclusive.

However, after the Taliban ousted the government of President Ashraf Ghani, uncertainty has continued to surround the continuance of education of the Afghan girl child.

Recall that Afghan athlete Zakia Khudadadi in August said she felt imprisoned after the country’s paralympic committee said there was no chance for her and another female athlete to participate at the Tokyo 2020 Paralympic Games.

Ms Khadadadi would have been her country’s first female competitor at a Paralympic Game.