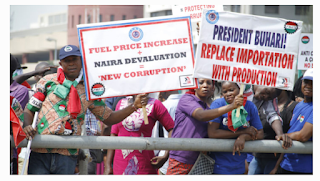 The Trade Union Congress of Nigeria (TUC) says for 61 years that Nigerian workers have been demanding better welfare package, the government has turned a deaf ear.

This was stated in a congratulatory message to Nigerians on the country’s 61st anniversary.

“It is disheartening that at 61 years, we are still begging for better welfare, decent work, and tools that would enable us, the workers, to do our work,” said TUC president Quadri Olaleye, and secretary-general, Musa-Lawal Ozigi in a statement on Thursday.

Mr Olaleye noted that the contributions of the country’s working class in the union’s developmental struggle could not be over-emphasised.

“For instance, there was the Lagos strike of 1897, described as the first major labour protest of the colonial period. We also had a general strike in mid-1945 involving over 17 labour unions, and an estimated number of 200,000 workers participated,” said the statement. “The reasons for the above strikes are not different from the reasons we still call out our members today.”

According to the TUC leaders, the anniversary availed Nigerians another opportunity to assess the country’s development and aspirations.

“Nigeria is well blessed with resources enough to make her rank among the first three leading economies in the world. Beyond the resources from the ground, Nigerians have proven to have the innate ability to create wealth,” said TUC. “Our resources have not been well managed by the elites; hence the country is categorised today as the poverty capital of the world. This has become our tale because appointments are predicated on political affiliation, ethnicity and religion.”

The statement commended the manufacturing sector operators for their resilience despite poor infrastructural development and the COVID-19 pandemic’s disruption.

The TUC urged the government at all levels to seize the opportunities offered by the COVID-19 crisis by providing a friendly business environment.

“No country is truly independent until it is industrialised and able to produce most of what it consumes. The naira loses its value because Nigeria is a consuming nation. The federal government must, as a matter of urgency, create an enabling environment that would deepen light and heavy manufacturing companies,” added TUC. “To actively participate in African Continental Free Trade Area (AfCFTA) agreement, the government must change the narrative. Similarly, the immigration and customs services must also up their game; check expatriate quota and influx of foreigners into the country.”