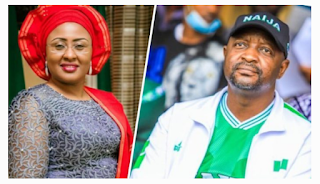 The Minister of Youth and Sports Development, Sunday Dare, has donated N50 million to the local organising committee of the Aisha Buhari Cup to ensure the competition’s success.

The minister, who announced the donation on Tuesday when the LOC paid him a courtesy visit, added that the international women’s football invitational tournament billed for Lagos in September could boost women’s football development and unite the nation.

“I knew you started all these with little or no funds, but seeing how much progress you have made and positive strides you have taken showed me that you are miracle workers,” said the sports minister. “I have read a lot about what you have done even when I was at the Olympics.”

The minister assured that necessary support would be provided to make the competition a huge success because of its potential further to encourage more participation in the women’s game.

“When the NFF President, Amaju Pinnick, told me of the plans to stage the competition, the first question I asked him was if he had enough time to see it through. He said yes, and I promised to lend him my support 100 per cent,” Mr Dare explained. “I’m glad that the event is now a reality. The competition will not only excite and inspire our people, but it will also unite us. Whatever will unite people has the full support of the Federal Ministry of Youth and Sports Development, so my support is total, especially since it has to do with women’s football.”

He noted that six of the top women football-playing nations in Africa, including Ghana, Morocco, Cameroon, South Africa, Mali, Cote d’Ivoire, and host, Nigeria, would participate in the competition.

Mr Akinwumi, however, appealed to the minister to assist in fast-tracking entry visas for the participating teams.

The tournament will hold in Lagos from September 13 to 21 at the Agege Stadium and the refurbished Mobolaji Johnson Arena, Onikan.