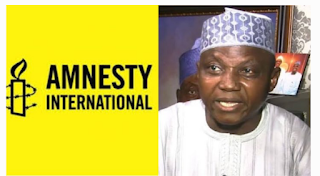 The human rights organisation had in a statement to mark the International Day of Support for Victims of Enforced Disappeared on Monday, condemned the Buhari regime for increase in sudden disappearance of Nigerians in custody.

The group lamented the disappearance of over 200 people  – including former Niger Delta militants, members of IPOB and #EndSARS protesters.

But Mr Shehu in a statement on Wednesday dismissed Amnesty International’s statement as a “rant,” though he did not respond to several cases of disappearance in detention listed in the body’s statement.

“Speaking the language of universal human rights, Amnesty International deploys it only in defence – even outright promotion – of those that violently oppose the Federal Government of Nigeria,” Mr Shehu said.

“Parroting the line of Nnamdi Kanu and IPOB, a proscribed terror organisation, they work to legitimise its cause to Western audiences.”

Mr Shehu further claimed that IPOB members have cache of weapons and bombs across the country, adding that Mr Buhari will fight terrorism with everything at his disposal.

They kill police officers and military personnel and set government property on fire.

Now, they have amassed a substantial stockpile of weapons and bombs across the country.

Were this group in a Western country, you would not expect to hear Amnesty’s full-throated defence of their actions.

Instead, there would be silence or mealy-mouthed justification of Western governments’ action to check the spread of ‘terrorism’,” Mr Shehu said.

“The Nigerian government will fight terrorism with all the means at its disposal.

We will ignore Amnesty’s rantings.

Especially when it comes from an organisation that does not hold itself to the same standards it demands of others,” he added.

In 2016, Amnesty  International reported how Nigerian soldiers opened live rounds on IPOB protesters, killing over 150 of them.

Leader of IPOB Nnamdi Kanu is currently in government detention and facing trial for treason after he was repatriated under shady circumstances from Kenya by the Buhari regime in June.