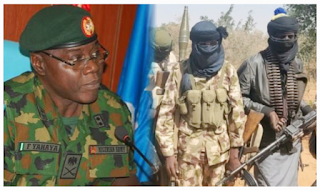 The Chief of Army Staff (COAS), Farouk Yahaya, has vowed to hunt down the Nigerian Defence Academy (NDA) attackers and assured the military university of enhanced security.

Mr Yahaya gave the assurance on Tuesday when he visited the academy, said a statement issued by army spokesman Bashir Jajira.

“The COAS vowed that no matter how long it takes, the perpetrators of this heinous act would be brought to justice,” the army statement said.

According to the statement, the army chief’s visit to the academy was to get a firsthand brief on the attack and commiserate with the NDA commandant, Maj.-Gen. Ibrahim Yusuf.

It added that Mr Yahaya assured the academy that the army would also provide additional operational enablers to enhance its security further.

He appealed to the academy’s staff to remain loyal to the country and not allow the unfortunate incident to deter them from their ultimate objective of grooming officer cadets for the Armed Forces of Nigeria.

He also urged officers, soldiers, and civilian staff in the academy to remain vigilant “because the fight against insecurity must be a collective effort.”

The army disclosed that Mr Yahaya also undertook an on-the-spot assessment of the attack scene before departing from the NDA. Mr Yusuf briefed him on the August 24 security breach into the academy.