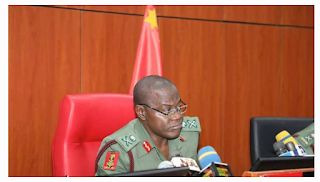 The Chief of Army Staff, Lt.-Gen. Faruk Yahaya, has vowed to professionalise the Nigerian Army.

The army has sometimes been accused of violating human rights, including using child soldiers to prosecute the Boko Haram war.

Mr Yahaya tasked the regimental sergeant majors (RSMs) to restore the traditions and discipline of the army.

The army chief made the call at the 2021 RSM Convention held at the 2 Division, Nigerian Army Headquarters, on Monday in Ibadan.

The RSMs are responsible for assisting their commanders in maintaining standards and discipline amongst the non-commissioned members and act as parental figures to their subordinates.

Mr Yahaya further stated that the RSMs, as an essential link between officers and soldiers, “being the custodians of the Nigerian Army ethics and traditions,” must redouble their efforts to restore “these customs of the army.”

“In every unit, RSM is considered as the father of the unit, who keeps the culture and traditions of that unit. And, if there is an issue to be cleared, the RSM is the last result, and if he speaks, that ends it,” added the army chief. “I urge you to do your best and put in everything to restore that exact position of RSM in ensuring the Nigerian Army’s traditions.”

Mr Yahaya further explained that once RSMs could restore “their earlier positions,” it would enhance the “effectiveness of the profession of the Nigerian Army.”

“I have a special regard for RSMs in the Nigerian Army. Among the things I want to achieve is to return the Nigerian Army soldiers to the professional place where they can do their jobs without hindrance,” said Mr Yahaya. “I want to see the RSM that I met when I passed out from the academy.”

The General Officer Commanding (GOC), 2 Division, Maj.-Gen. Gold Chibuisi, urged the officers to put in their best to attain the vision of the army chief.

Mr Chibuisi said the army could achieve Mr Yahaya’s vision without professional and highly regimented sergeant majors that were ready to discharge their responsibilities at all times.

The GOC urged the participants to see the convention as a platform to reposition themselves in their roles toward actualising the army boss’ vision.