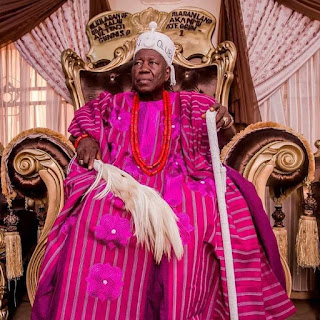 Oba Saliu Adetunji was born in Ibadan, Western Nigeria in 1928. He was the first of 17 children – a modest number by standards as his father was quite influential.

Anyway, he trained as a cloth weaver and in his teenage years, he was sent to Idumota, Lagos to apprentice as a tailor. One day as he sat working in his shop, an elderly man paused to catch his breath and Saliu saw that he was tired. So he offered to assist the man and carried his load to hid house, few streets away. The baba offered him money but he refused, saying he just wanted to help. The Baba wasn’t willing to let him go empty handed so he gave him a phonograph to play on his portable wind-up gramophone.

Given the time, it must have been a sakara or apala. In any case, Saliu had only played it once or twice when passerby offered to buy it. He obliged and went back to the Baba to give him the money. Baba said, “I didn’t give to sell, it was for your listening pleasure but here’s a few more records just in case.” Again, he sold them all in days and then he started thinking, maybe there’s some prospect in this line o! So he found out where records were sold and became a retailer.

In 1957, he founded Omo Aje Records, a nod to his ability to sell stuff for profit, you know, Aje being the Yoruba goddess of enterprise and wealth. In time, Omo Aje Records evolved from being a record shop to becoming a music promoter and distributor of all the Yoruba musicians of that era: Tatalo Alamu, Dauda Epo Akara, Jimoh Ayinla Anikura and many others.

Even when his first outlet in Oke Popo was burned down in a fire incident, he bounced back and built a bigger, more spacious structure on Ibomo Street, just behind Agarawu. At the age of 48 in 1976, he became the de facto head of the family and changed Omo Aje Records to Babalaje Records.

Perhaps, his most important musical legacy is that he gave young Wasiu Ayinde a chance to be his own man – after tutelage with the late great Sikiru Ayinde Barrister. Ayinde’s breakout album, Talazo ’84, was released under Babalaje Records and the two worked together on no less than 20 Wasiu Ayinde albums – from Talazo in 1984 (of course) to Fuji Collections in 1991. They remain close till date.