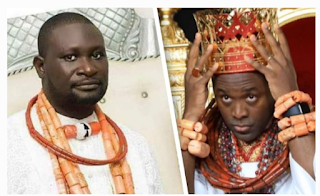 The Olu of Warri, Ogiame Atuwatse III, has ended the reign of billionaire businessman Ayiri Emami, appointing a new traditional prime minister for the Warri kingdom on Thursday.

The Olu announced that the Iyatsere of Warri Kingdom, Johnson Amatserunleghe, will now fully take charge as the traditional prime minister of the kingdom.

He announced this during the plenary of the Warri Council of Chiefs on Thursday.

Other Warri council of chiefs, who were earlier required to revalidate their titles, have also been asked to return to their original positions and serve their people under the Olu’s supremacy, according to Punch reports.

The ousted Mr Emami held the position of ‘Ologbotsere’ and served as prime minister of the kingdom during the tenure of the former Olu of Warri, Ogiame Ikenwoli.

He mounted stiff opposition to the emergence of the new Olu, insisting that he was not qualified to ascend the throne of his fathers due to his maternal heritage.

On August 21, the Olu of Warri, Ogiame Atuwatse III, was crowned as the 21st Olu at Ode-Itsekiri, his ancestral home in Warri, Delta state.

The ancient kingdom in Delta state in Nigeria is the home to the Itsekiris and is rich in culture reflective of their Oduduwa ancestry and their early interactions with the Portuguese.