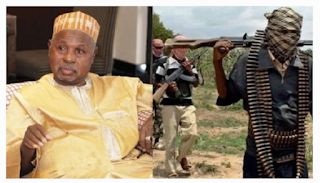 Bandits have kidnapped a younger sister of the Deputy Speaker of the Katsina House of Assembly, Shehu Dalhatu Tafoki.

The victim, identified as Asma’u Dalhatu, was kidnapped in the early hours of Sunday.

The armed bandits took her away after they attacked Tafoki village in the Faskari local government council.

The deputy speaker, who confirmed the abduction on Monday, explained that the gunmen suspected to be bandits stormed the village around 1:00 a.m. on Sunday and moved straight to the village head’s residence, his family house, and kidnapped two of his sisters.

He added that while trying to make their way into the forest, the bandits encountered vigilantes who engaged them in gunfire. In the process, one of the kidnapped sisters escaped.

Mr Tafoki added that he had reported the incident to security agencies.

The bandits had yet to demand a ransom as of the time of filing this report.

The attack came less than 48 hours after bandits stormed Kurami in Bakori local government area and abducted the wife and two children of Ibrahim Kurami, the lawmaker representing Bakori constituency in the state’s assembly.

Bakori LGA is about 42 kilometres from Faskari LGA, where the latest abduction took place.