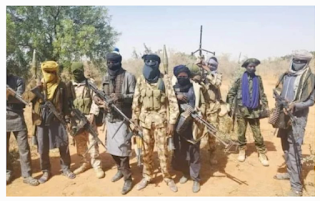 Bandits on Sunday morning attacked a church in Kogi State, killed one person, and  kidnapped three other worshippers.

Police spokesman in the state, William Aya, who confirmed the attack to Peoples Gazette on Sunday afternoon, said efforts have been put in place to arrest the perpetrators.

“I can confirm the incident to you,” Mr Aya said in a telephone interview, stating that “efforts are already on to ensure the perpetrators are arrested.”

The incident happened at the ECWA Church along the Expressway of Kabba-Okene road in Kabba, headquarters of Kabba Bunu Local Government Area of Kogi State, per Punch reports.

A worshipper who was present when the gunmen arrived, Kayode Akanbi, said that the service was barely underway when the incident happened.

Mr Akanbi said that the gunmen, numbering six, were armed with guns and cutlasses and did not mask up.

“We were trying to commence the normal service.

“We just started the call to worship and I was interpreting the pastor’s message when suddenly the gunmen entered from the main entrance and raised their guns.

“They shot sporadically and everybody started scampering to safety,” NAN quoted Mr Akanbi to have said.

According to Mr Akanbi, two of the oldest members were taken away by the gunmen.

He said also that the gunmen killed a 45-year-old worshipper in the process, adding that the spouse of one of the two abducted worshippers and another male worshipper sustained gunshot injuries.

Mr Akanbi said that police later visited the scene to take the dead to the mortuary at the General Hospital, Kabba, while the two injured persons were taken to Lokoja for treatment.

The attack on the church comes barely seven days after the correctional centre in Kabba in Kogi State was attacked, leading to the escape of over 200 inmates and killing of soldiers, The Gazette reported.

The Nigerian Correctional Service (NCoS) in an earlier statement said it recaptured 114 escapees of its Kabba custodial centre who were among the 240 inmates set free on September 12.