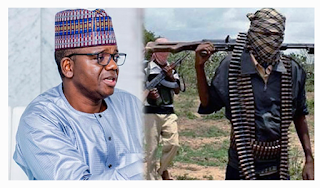 Governor Bello Matawalle of Zamfara has appealed to residents to intensify prayers for God’s intervention to end banditry in the state.

He also requested the populace to pray for forgiveness.

Mr Matawalle made the call during a special prayer session organised by the Ulamau Consultative Committee (UCC), held all over the state.

A few days ago, the police command in Zamfara warned that bandits were plotting to attack the state.

The governor who attended the prayer at the Gusau Central Mosque said it had become imperative for the citizens to complement the government and security operatives’ efforts to tackle the rampaging bandits.

”Prayer is the only powerful weapon that can solve any calamity on the people,” said Mr Matawalle. “We must seek Allah’s forgiveness.”

The special prayer session was observed in all the Juma’at mosques in Zamfara.

In late August, the police had revealed that bandits’ attack on the Tsafe local government area was imminent, forcing security agencies, including the military, to intensify joint ground and air surveillance patrols on the Gusau to Tsafe-Yankara road.

This is contained in a statement issued by the command’s spokesman Muhammad Shehu.

”There was intelligence report that the bandits threatened to attack some communities in Tsafe local government area of the state,” said the police statement. ”The command in collaboration with other security agencies especially the military has emplaced adequate security in Tsafe and environs to safeguard the lives and properties of the citizens.”

It urged the residents “to remain calm and continue with their normal legitimate business.”

The statement added, ”They should equally support the security operatives with credible information about the activities of criminal elements for prompt action.”