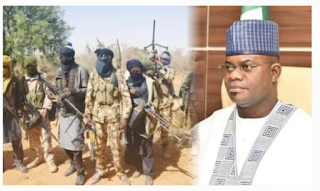 Suspected armed bandits have invaded Kabba prison in Kogi, freeing their colleagues and other inmates while killing soldiers at the facility.

The bandits freed no less than 240 inmates, killing a yet-to-be-identified number of soldiers.

The heavily armed gunmen attacked the Medium Security Custodial Centre in Kabba around 11:35 p.m. on Sunday night, engaging the facility’s guards in a shootout.

A source in the facility told Peoples Gazette that some soldiers were killed, but he could not immediately confirm the actual figure.

“They overpowered soldiers at a military checkpoint close to the correctional centre, and that gave them access to the facility,” he said, also confirming that bandits were part of the inmates.

He noted that most of the inmates escaped after the walls were broken down. Some returned while a few others were rearrested.

“The attackers in their number were said to have arrived at the Custodial Centre heavily armed and immediately engaged the armed guards in a fierce gun battle,” Francis Enobore, the spokesperson for the correctional centre, said in a statement on Monday.

Mr Enobore noted that a recapture procedure has commenced as investigations were ongoing.

However, when contacted by The Gazette to confirm the casualty figure, Mr Enobore said it could not be immediately ascertained as findings were ongoing.

“We’re going for an investigation. We’re heading to the site now and until we’re able to make a proper investigation on what transpired on the ground, we may not be able to ascertain that for now,” he said.

The spokesperson for the Nigerian Army, Onyema Nwachukuwu, did not respond to The Gazette’s request seeking comments on the attack.

Prior to the attack, the 200 capacity MSCC was said to have 294 inmates in custody, out of which 224 were pre-trial detainees and 70 convicted inmates.

A similar incident occurred in April this year, after unknown gunmen attacked a correctional facility in Owerri, freeing 1,844 inmates in custody.

The gunmen were said to have stormed the facility in the wee hours of April 5, gaining entrance by using explosives to blast the administrative block.

The Gazette, in a recent report, discovered that at least 3,600 inmates have escaped from different prisons between 2007 and 2021 with the aid of Boko Haram terrorists, among other criminal elements in the country.