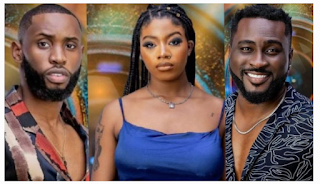 Emmanuel, Shine Ya Eye housemate of the TV reality show, Big Brother Naija, has emerged head of house for the final week.

This was announced by Biggie, the show coordinator, after the head of the house challenge was completed as four of the housemates participated in the challenge.

Big brother, the show coordinator, has decided to release Pere and Angel to join other housemates, rewarding them to be part of the last housemates in the show for their tenacity toward the game.

Pere and Angel were subjected to a game of ‘trucks and screwdrivers’ as the winner will be allowed to join the other four housemates currently on the show.

After playing the game for 24 hours, Biggie decided to allow the duo to join the other housemates, following their commitment to emerging the game’s winner.

The show now has six housemates finally heading for the final day slated for October 3 as they all compete for the winner of the N90 million.