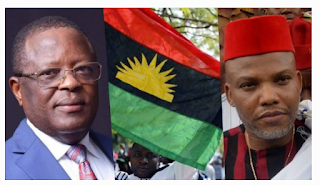 Governor David Umahi of Ebonyi says criminals, including kidnappers and cultists, have hijacked IPOB’s agitation for an independent State of Biafra.
“The declaration of South-East as a red zone by these ministries means that what is due to us would be difficult to come,” said Mr Umahi on Tuesday in Abakaliki while inaugurating the new South-East Traditional Rulers Council leadership. “It is time for the zone’s leaders and people to collectively say no to the killings in the zone because we no longer see the real agenda of the agitations.”
He urged Igbos to “support governors from the zone and other leaders to permanently stop this bloodshed because we know the parents and communities of the perpetrators of the heinous acts.”
He further explained that the agitation for secession had been hijacked by cultists, kidnappers, and other criminal elements, urging “the acclaimed freedom fighters” to review the situation critically.
The governor also expressed the fear that the declaration of the South-East as a red zone would deprive the region of federal projects.
He pointed out that various federal government ministries had recently declared the region “as a red zone” because of its worsening insecurity.
According to him, the insecurity, occasioned by agitations for self-determination, amounts to “self-inflicted injury” by the people.
“It is presently difficult for trucks with goods from other parts of the country to come to the zone as we did not harmonise adequately to determine areas of comparative advantage,” Mr Umahi added.
Also, the governor reiterated his stance that the FIRS should continue to collect and distribute proceeds from the value-added tax.
(NAN)
Tags # News
Share This