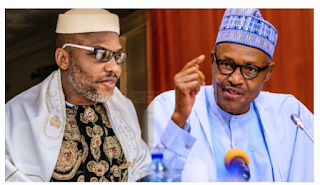 IPOB leader Nnamdi Kanu has sued President Muhammadu Buhari’s regime for violating his fundamental human rights and is seeking a court order mandating the regime to return him to the UK.

His lawyer Aloy Ejimakor filed a lawsuit at the Abia State High Court seeking N5 billion compensation. The lawyer stated that Mr Kanu had suffered “physical, mental, and psychological damages in the hands of the regime.

Mr Kanu sought the court to declare his repatriation from Kenya as unconstitutional and illegal, demanding his release from detention.

Mr Ejimakor prayed for “an order mandating and compelling the respondents or their agents to forthwith release the applicant from detention and restitute or otherwise restore applicant to his liberty, same being his state of being as of June 19, 2021.”

In addition, the IPOB leader’s council requested the “repatriation” of Mr Kanu “to his country of domicile (to wit: Britain) to await the outcome of any formal request the respondents may file before the competent authorities in Britain for the lawful extradition of the applicant to Nigeria to continue his prosecution in Charge No: FHC/ABJ/CR/383/2015 (Federal Republic of Nigeria v. Nnamdi Kanu).”

He also asked the court to mandate Mr Buhari’s regime to “issue an official letter of apology to the applicant for the infringement of his fundamental rights and publication of said letter of apology in three (3) national dailies.”

Mr Ejimakor further requested “an order restraining the respondents or their agents from taking any further step in the prosecution of the applicant in charge No: FHC/ABJ/CR/383/2015 (Federal Republic of Nigeria v. Nnamdi Kanu) pursuant to said unlawful expulsion of the applicant from Kenya to Nigeria.”

According to court documents seen by Peoples Gazette, following the ex parte motion, the judge, K.C.J. Okereke, granted the applicant leave to serve all orders made by the court through substituted service to respondents in the suit.

“That leave be and hereby granted to the applicant to serve all the court processes in this suit through substituted service upon the third, fifth and seventh respondent,” said Mr Okereke. “That the applicant puts all the respondents on notice of the application and that the return date be and is hereby fixed for 21 day of September 2021, for the motion on notice.”