Buhari different from Obasanjo, Jonathan who borrowed to loot: Presidency - The Naija Weekly

Buhari different from Obasanjo, Jonathan who borrowed to loot: Presidency 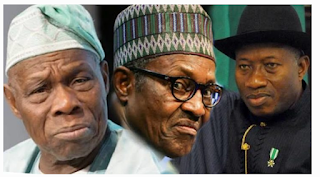 Unlike the administrations of ex-presidents Olusegun Obasanjo and Goodluck Jonathan, who borrowed on behalf of Nigeria only to steal the money, President Muhammadu Buhari takes loans to develop the country, claims the Presidency.

The former president had condemned the voracious loan appetite of Mr Buhari’s regime, describing it as foolish and criminal.

Mr Obasanjo’s statement came in the wake of Mr Buhari’s request to the National Assembly for a new $4 billion loan.

The president’s other media aide Garba Shehu, last Saturday, listed 15 projects across the six geopolitical zones the loan will finance.

Mr Shehu said the president requested the Senate to approve sovereign loans of $4.054 billion and €710 million and grant components of $125 million for the projects.

According to the Nigerian Domestic and Foreign Debt Report, published this year by the National Bureau of Statistics (NBS), the country’s total public debt as of September 2020 is N32.2 trillion ($84.57 billion).