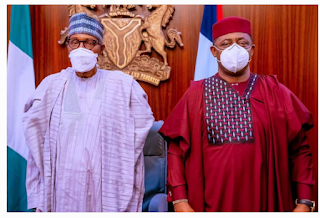 Talksome politician Femi Fani-Kayode has showered praises on President Muhammadu Buhari, describing him as one with receptive ears, after several years of lambasting him for several reasons.

“With his receptive ears, his reception, and those around him; I have seen that definitely this is a man that one can work with provided you go through the right channels,” Mr Fani-Kayode told Channels Television shortly after he announced his defection to the All Progressives Congress on Thursday.

The former minister said he was wrong to have accused the president of turning deaf ears to issues that cut across national interests.

“A man that I believe would not listen to anybody else in the past, I was quite wrong on that,” he claimed.

Mr Fani-Kayode who had described rumours of him joining the APC as “deeply insulting”, stressed that “We can work together, we can come together, we can build bridges, we can effect unity in this country.”

For several years, the former minister criticised the Buhari regime, accusing the president of being tribalistic, turning deaf ears to incessant killings and only orders army personnel to kill citizens.

The newest APC member claimed to have now discovered several things about the president since moving closer to him in the past few months, adding that “there is a lot going on behind the scenes.”

He further said that Nigerians should be more concerned about building the country and not what he said or did in the past years, just as he refuted claims that he joined the ruling party for financial reasons.

“Let’s not focus on what FFK has done or said. Let’s focus on building our country, bridges to ensure that we don’t turn on one another as a people and end up having a civil war,” he said.

In 2019, Mr Fani-Kayode described the APC as “a filthy, rat-infested sinking ship,” stressing that he would rather die than join the ruling party.

“The suggestion that l joined the APC is false and insulting. Those that are peddling this fake news should bury their heads in shame. With what we have witnessed, l would rather die than join a filthy, rat-infested sinking ship like the Almajiri Peoples Congress (APC),” he said in a tweet.

In another tweet, he noted that he was “committed to opposing the APC and those that are in their ranks for the rest of my natural life and I will NEVER join them no matter what! They are nothing but darkness whilst l stand for the light of God and truth: there can be NO fellowship between light and darkness.”