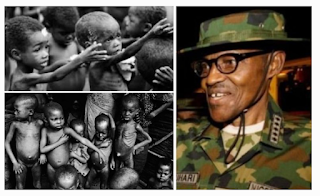 President Muhammadu Buhari did not take a day off in a genocidal Civil War he fought on the side of the Nigerian troops until the government troops massacred an estimated three million Igbos, and he remains fearless of the remnant Biafran elements, IPOB, says his media aide.

“I got messages filled with trepidation from home and abroad. Please, prevail on the president to cancel the trip (visit to Imo). He should apologise to Governor Hope Uzodinma of Imo state and abort the visit. There could be a bloodbath,” Mr Adesina claimed in a Facebook piece on Thursday.

“I only laughed it all off,” the presidential aide continued.

“Who would tell a duly and popularly elected president where to go and where not to go in his own country? At the height of the Boko Haram insurgency, he had campaigned in Borno state in 2015 and 2019, respectively,” boasted the spokesman.

Underlining the president’s fearlessness and genocidal tendency, Mr Adesina reminded Nigerians that until the 30-month war between the federal troops and Biafran soldiers ended, Mr Buhari was restless until some three million Igbos, mostly women, and children, were massacred in a genocide.

“A man, who repeatedly tells us that for the 30 months the Nigerian Civil War lasted, he was right there at the front, not even taking one day off. Is that then the person you would scare from visiting any part of the country?” said Mr Adesina.

The genocidal war occurred between 1967 and 1970, triggered by the South-East’s secession from Nigeria and the declaration of an independent State of Biafra, recognised by some countries.

Mr Adesina further asserted that the president was not scared of visiting Imo regardless of IPOB’s violent attacks in the South-East region because he was familiar with the terrain.

In June, Mr Buhari, in a tweet, threatened a repeat of the Civil War genocide in the region, eliciting much condemnation from the public and Twitter’s deletion of the president’s genocidal tweet.

Since then, Mr Buhari and his regime have continued to make rhetorics of the Igbo massacre.