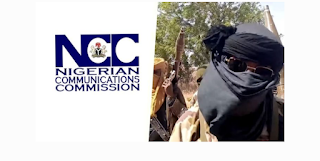 The Buhari administration on Friday ordered all telecom networks operating in Zamfara to shut down operations forthwith as security forces ramp up measures to contain the reemerging upsurge of armed banditry ravaging the state and its environs.

Telecom regulator NCC in a directive to mobile network carriers on Friday said all telecom masts should be demobilised across the beleaguered state and in neighbouring communities where signals from masts could be beamed into Zamfara.

“The pervading security situation in Zamfara State has necessitated an immediate shutting down of all telecommunications service in the state from today September 03, 2021,” NCC chief Umar Garba Danbatta said in a letter sent to Globacom headquarters in Lagos.

“This is to enable relevant security agencies to carry out required activities towards addressing the security challenge in the state, in line with the requirement, Globacom is hereby directed to shut down all sites in Zamfara State and any site(s) in neighbouring state that could provide telecommunications service in Zamfara State,” the letter added. “The site shutdown is for two weeks (September 03 – 17, 2021) in the first instance. Your urgent action in this regard is required.” 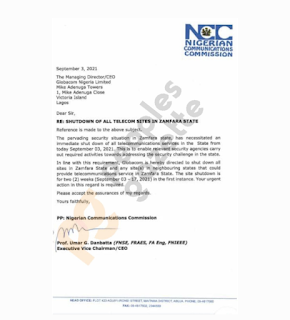 The directive could spark concerns about the safety of citizens across the state, and whether or not the administration has powers to deprive millions of citizens of their rights to communicate and access information. Mr Dambatta did not immediately cite any extant constitutional provisions for the measure in his letter to telecom operators.

The government said the two-week measure would aid security forces in their bid to trap bandits in their hideouts while disrupting their information flow with informants and other collaborators. Zamfara has been amongst the worst-hit states since armed bandits launched their rampage across Nigeria’s northwest.

Kaduna and President Muhammadu Buhari’s home Katsina have also suffered frequent and severe clashes from armed bandits, which often include mass abductions and seizure of lucrative assets and gold mines.

The shutdown of telecom signals came days after Governor Bello Matawalle banned transportation of food items and restricted the movement of commercial motorcycles between 6:00 p.m. to 6:00 a.m. The governor also said placed a moratorium on the transportation of petrol and other fuels in Zamfara.

Dozens of so-called repentant bandits have been arrested in recent weeks in Zamfara and Katsina, with the police warning that efforts to integrate them into the society may be tougher than politicians have publicly admitted.

A spokesman for the governor did not immediately return a request seeking comments about whether or not the government would continue its peace talks with bandits in the wake of their spontaneous return to the forests.