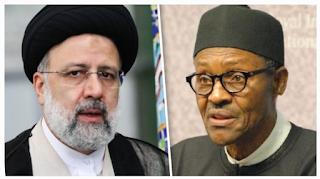 The Muhammadu Buhari regime has appealed to the Islamic Republic of Iran for the deepening of trade relations between the two countries.

This is as Iran considers direct shipping and flight to Nigeria.

Foreign Affairs minister, Geoffrey Onyeama, made the appeal on Thursday during a bilateral meeting with the Iranian Minister of Foreign Affairs, Hossein Amir-Abdollahian.

Messrs Onyeama and Amir-Abdollahan met on the sidelines of the ongoing 76th Session of the United Nations General Assembly (UNGA) in New York, United States.

The Nigerian minister reminded the Iranian foreign minister that Nigeria and Iran have excellent relations, saying that Nigeria will be very happy to improve even more, the relationship between both countries.

“We are two big countries in our respective sub-regions, but unfortunately, the level of trade is not what it should be. And we should do a lot more.

“And we were trying to also discuss on how this should not interrupt our trade and how we can also work together to improve that aspect of our trade,” Mr Onyeama said.

In his remarks, Mr Amir-Abdollahian said envoys of both countries, with a great deal of hard work and focus and in all seriousness, were pursuing the further development of the relationship between Nigeria and Iran.

“Mr Minister, as you do know, both countries have very high capacities for mutual cooperation.

“But as you said, the level of trade, collaboration and cooperation between our two countries is not at the satisfactory level, particularly when we look at the level of political cooperation that exists between the two nations.

“And of course, as you do know, Your Excellency, the private sector from both of our respective countries, are very keen on developing and progressing their ties with one another,” he said.

Mr Amir-Abdollahian further said in order to realise the desired higher volume and commercial trade between both countries, Iran is seeking and studying how to best establish direct shipping route from Iran to Nigeria.

He said Iran had no issues or challenges whatsoever in completely removing any type of obstacle that may hamper the progress of trade between both countries.

The Iranian foreign minister also said in the beginning, Iran can do its very best where it is needed in order to remove or lessen any restricted duties that may exist.

Mr Amir-Abdollahian added that subsequently, Iran is ready and very much willing to best analyse on how to go swiftly about the removal of such duties that exist between both countries.

He added that Iran stood ready and willing to swiftly review in depth the previous agreements between both countries, activate them where possible and also establish, as soon as possible, a joint economic commission in Tehran.

The Buhari regime has been seizing the opportunity of the ongoing UNGA to solicit support for Nigeria’s wobbly economy under its supervision. People Gazette on Thursday reported how Mr Buhari begged the Queen of Netherlands for investment in Nigeria.