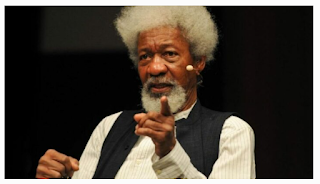 Nobel laureate Wole Soyinka says the historic nationwide #EndSARS protests that led to the scrapping of the brutish police unit was disrupted by thugs and prisoners unleashed on young Nigerians by the Muhammadu Buhari regime.

In an interview with the UK Guardian over the weekend, Mr Soyinka said he was delighted that the younger generation, whom he considered as lazy and in need of salvation, “took on these brutes called the SARS. And of course, it wasn’t just the SARS.”

Describing the protest as “an expression of discontent” by the younger generation, Mr Soyinka said the protest, however, ended on a depressing note as sponsored “thugs took over”.

“To see this structured movement, I felt rejuvenated. I said: “At last, it’s happening,” and then what happened? The thugs took over. The villains took over. The underworld got in on the act. Prisoners were let loose. It was very depressing,” Mr Soyinka said.

The demands of #EndSARS protesters included the scrapping of the Special Anti-Robbery Squad of the Nigerian police notorious for extortion and extra-judicial killings, justice for SARS victims and compensation for families of police brutality, among others.

The protest ended on a sad note as Nigerian soldiers opened live rounds on protesters at the Lekki Toll Gate, Lagos, on October 20, 2020

One year after the Buhari regime promised to meet the protesters’ demands, with states constituting judicial panels on the matter, there’s been no reasonable outcome.