Buhari regime should use mathematics to solve Nigeria’s insecurity: Mathematicians - The Naija Weekly

Buhari regime should use mathematics to solve Nigeria’s insecurity: Mathematicians 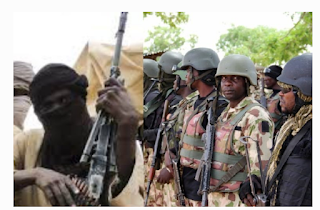 The Mathematical Association of Nigeria (MAN) has called on President Muhammadu Buhari’s regime to use mathematical models to solve Nigeria’s worsening insecurity.

“Security issues are no more analogue. They are mathematical and digital. So, if we can harness the intelligence of these individuals, who acquired skills in mathematical applications certainly, security challenges will be minimised to the barest minimum,” Mr Musa explained. “In fact, if you look at the various aspects of insecurity, not just the physical, the mental aspect of it that is associated with causes, relates to mathematical applications.”

He suggested that mathematical calculations could be used to manipulate humans.

“If we look at what is called artificial intelligence, we can manipulate human behaviour. These are some of the things the conference is going to address,” Mr Musa added.

In a keynote address, Ibrahim Shekarau, a former governor of Kano, noted that “mathematics was the most important technique in crime detection.”

Mr Shekarau, represented by Umar Musa, the director-general of Shekarau Organisation, further stated, “Today, mathematics lies behind expert conclusions on hundreds of forensic matters, from fingerprints to DNA. Mathematics is playing an increasing role in crime scene investigation and helping forensic scientists work out a range of problems, including the trajectories of bullets, fingerprints recognition, and the speed of moving vehicles.”

According to him, mathematics also plays a vital role in military operations and cybercrime.

“Nation’s advancement in the production of warfare equipment depends solely on the level it has reached in science and technology. Interestingly, Mathematics is the language of science and technology,” the former Kano governor explained. “Therefore, mathematics is necessary for addressing all security challenges. Mathematics is a powerful tool and, if used correctly, will contribute immensely in tackling security challenges in Nigeria.”