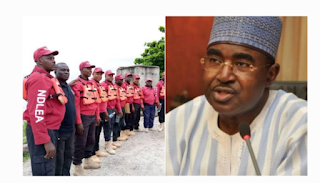 The regime of President Muhammadu Buhari has endorsed the construction of barracks for workers of the National Drug Law Enforcement Agency (NDLEA) and their families across the country.

Buba Marwa, chairman of the NDLEA, revealed this after a meeting with Mr Buhari on the agency’s activities at the Presidential Villa, Abuja, on Friday.

The NDLEA boss said the building of barracks for the agency staff had become imperative to protect them and their families from criminals involved in drug trafficking.

“I raised the issue of barracks. The NDLEA has been in existence for 32 years. All other agencies, Armed Forces, Police, Customs, Immigration, Road Safety, all have estates, and barracks, except the NDLEA; we still don’t have barracks.

“And now, considering the hazardous nature of the work that we do, the danger in it, we arrest and jail the criminals and then live amongst them,” Mr Marwa said.

According to the NDLEA boss, of all the issues he discussed with Mr Buhari, the president was more interested in the construction of barracks for NDLEA operatives.

He said the president “was very well-seized of it”, and “disclosed that when you send operatives, to go into the forest, to go after the criminals, they will be encouraged if they knew that their own families are secured in a barracks somewhere.”

He said the agency got a positive response from Mr Buhari and was looking forward to the execution “as soon as it is practicable.”

Mr Marwa said he also requested for recruitment of more personnel into the NDLEA.

“Another thing we talked about was the issue of recruitment. Considering the size and responsibilities before us and we also again received a listening ear, we are very grateful.”

On their activities, Mr Marwa disclosed that the agency had seized illicit drugs worth over N100 billion, stating that the money recovered had been deposited with the Central bank of Nigeria.

He said the NDLEA had sought forfeiture of the drugs from the courts for destruction.

According to him, between January and September this year, 1,630 people involved in drug crimes were sentenced to various terms of imprisonment by the courts across the country.

“As far as activities in the drug supply reduction sphere are concerned, we have seized drugs worth billions of naira, over N100 billion.

“Those cash have been sent to the Central Bank and the actual drug themselves, we have sought forfeiture from the courts for destruction.

“Since January, we have jailed 1,630 of these shameless criminals and murderers who traffic drugs. We have counselled and rehabilitated over 4,000 within our NDLEA facilities,” he said.