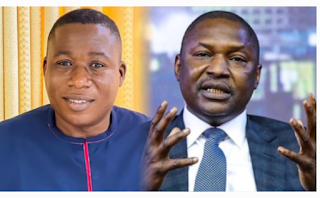 The Muhammadu Buhari regime says it plans to appeal the judgment of an Oyo State High Court, which awarded N20 billion in damages against the Attorney-General of the Federation and the State Security Service in favour of Sunday ‘Igboho’ Adeyemo.

The AGF, Abubakar Malami, announced the regime’s decision to appeal in an interview with the News Agency of Nigeria (NAN) in Abuja on Friday.

Yoruba Nation activist, Mr Igboho, had sued the regime for N500 billion for violating his fundamental human rights following the SSS illegal invasion of his residence at the Soka area of the Oyo capital, Ibadan, on July 1, without an arrest warrant.

Mr Igboho, in the suit filed by his lawyer Yomi Alliyu claimed his house and cars were damaged, and two occupants of the house killed by SSS operatives during the raid.

Mr Malami’s lawyer had argued that there was no evidence before the court that the blood seen in the video clip tendered by Mr Alliyu belonged to a human being.

He also said nothing in the video showed the invaded house belonged to Mr Igboho or linked the AGF with the invasion and had urged the court to disregard the exhibits and dismiss the entire suit.

Lawyer to the SSS, T. A. Nurudeen, aligned with the submission made by Mr Malami’s lawyer. He insisted that there must be proof from a haematologist to show the blood in the video belonged to a human being.

Delivering his judgment, Ladiran Akintola, said the style and procedures adopted by the SSS during the raid was unprofessional and ruled that Mr Igboho had demonstrated his fundamental human rights were violated by the Buhari regime.

The judge also awarded N2 million as cost in favour of Mr Igboho for instituting the case.

Mr Malami says efforts were already in place to commence the process of appealing the judgment.