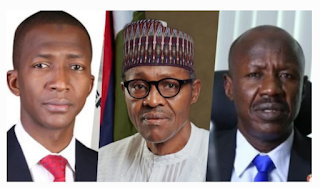 President Muhammadu Buhari’s regime will not name and shame Boko Haram financiers and other sponsors of terrorism in Nigeria, says his media aide Femi Adesina.

“Naming and shaming will not be the motive. Bringing malefactors to justice will be it,” Mr Adesina told Channels TV on Monday. “Nigeria is not interested in naming and shaming anybody. Rather, it wants to bring them to justice.”

In May, the Attorney-General of the Federation, Abubakar Malami, announced that high-profile Nigerians were financing terrorism in the country.

“In essence, it is indeed true that the government is prosecuting, and it’s indeed initiating processes of prosecuting those high-profile individuals that are found to be financing terrorism. It is indeed true,” Mr Malami had said.

Contrary to many Nigerians’ expectations, Mr Buhari’s regime failed to reveal the identities of the terrorism financiers.

But Mr Adesina stated that “rest assured that these people will be dragged before justice, and justice will have its way.”

He added that investigations were ongoing at various security agencies before arraigning the suspects.

Asked to name the financiers during an interview with Channels TV, Mr Bawa said, “If you are my adviser will you advise me to come on national television to tell the whole world regarding matters of sensitive national security issue? Certainly, not.”

Kunle Olawunmi, a former navy commodore, in August, alleged that the Buhari regime was familiar with sponsors of terrorism but yet to bring them to book.

“The government has developed cold feet in fighting the insurgency because some of those backing Boko Haram are now top-ranking government officials,” the military intelligence expert had said. “Why can’t this government, if not that they are partisan, bring those people out for trial?”