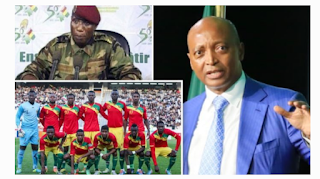 Clubs from Guinea will not be allowed to play at home in African club competition matches over the next fortnight following the coup that ousted President Alpha Conde on Sunday.

The Confederation of African Football (CAF) said this on Wednesday.

Instead, their two-legged ties in the first round of both the African Champions League and African Confederation Cup will now be a single match played at the homes of their opponents.

“After monitoring the political and security situation in Guinea and following careful consideration, the CAF Interclub Committee has decided that all three fixtures involving clubs from Guinea in the preliminary stages will be played in a single leg at the opponent’s territory,” said the CAF statement.

It means Kamsar are away at Hearts of Oak of Ghana in Accra in the Champions League on September 19, while in the Confederation Cup, Wakriya play at Diambars of Senegal on Sunday and Anglogold are away at Nigeria’s Bayelsa United on September 19.

Horoya, Guinea’s other club in the Champions League, have a bye into the second round next month.

Sunday’s military uprising has been condemned by foreign governments with West African leaders threatening sanctions over the overthrow of Mr Conde, who was serving a third term after first winning election in 2010.

The coup led to Monday’s World Cup qualifier between Guinea and Morocco being called off.

Morocco’s squad were flown out of Conakry on the night of the coup after negotiations between diplomats and soldiers, who had ordered the land and air borders closed.

On Tuesday, top Guinea players based in Europe, including Naby Keita of Liverpool, left the country on a plane chartered by their clubs.