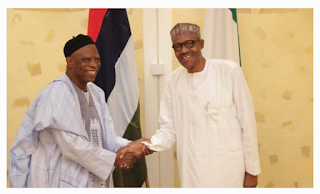 Former Governor Abdullahi Adamu of Nasarawa has described as “wishful thinking” the calls for the zoning of the presidency ahead of the 2023 election.

According to him, the calls are unconstitutional, noting that “they remain wishful thinking only.”

Igbos in Nigeria’s South-East have repeatedly called for the presidency to be zoned to the region.

”We are not being practical. How do you zone it? The constitution says you can only become a president through the ballot box. There is nowhere in the Nigerian constitution which says we should zone any office. There is Federal Character. That is the constitution,” argued Mr Adamu. “The Constitution is being reviewed. If you want to review and you want a specific provision, that presidential office to be zoned in such a manner, you tell us how you want it zoned.”

He explained that the constitutional provisions could not be wished away.

“You can’t talk of merit and talk of zoning. On the issue of rotation, let us just go by merit. Let every party find a way of selling itself in a manner as to garner the kind of vote to deliver the presidential result. It is as simple as that,” he said

Mr Adamu, also the chairman of the Senate Committee on Agriculture and Rural Development, kicked against anti-open grazing measures taken by southern governors.

“I believe as governors operating in a different tier of government, they have a constitutional responsibility. One of the fundamental provisions is that every Nigerian has a right to free movement and has a right to pursue legitimate business without hindrance,” said the lawmaker. “It is enshrined in the constitution.”

He added that the federal, state, and local governments “owe these herdsmen a duty to protect their calling.”