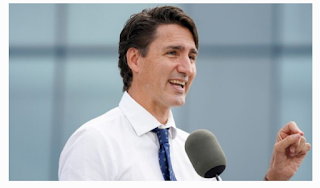 “Thank you, Canada — for casting your vote, for putting your trust in the Liberal team, for choosing a brighter future. We’re going to finish the fight against COVID. And we’re going to move Canada forward. For everyone,” Mr Trudeau tweeted on Tuesday.

Mr Trudeau’s Liberal Party was elected in 156 of the 338 seats in the House of Commons on Tuesday in Ottawa.

The Conservative party, led by Erin O’Toole, got 122 seats in the legislature. Minority parties like the New Democratic Party won 27 seats, and the Bloc Quebecois won 31 seats.

The result for this year’s elections is similar to that recorded in 2019, though Ms O’Toole’s party won one more legislative position than they did last time.

It Is the second time voters have denied Mr Trudeau the full party control of the legislature.

The polls reported a 31.8 per cent support for the Liberal party, making it the lowest share for any ruling political party in the country’s history.

Votes for the Conservative party stood at 34.1 per cent.