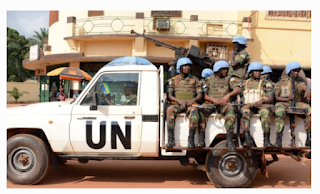 UN Spokesperson, Stephane Dujarric, disclosed at a press briefing at the UN Headquarters in New York on Wednesday that the repatriation was a decision of its secretariat.

On September 7, the UN secretariat requested the Gabonese authorities to appoint a national investigator within five working days and for the investigation to be concluded in less than 90 days.

Mr Dujarric explained that the decision followed credible reports received by the mission of sexual abuse by the Gabonese military contingent deployed to the peacekeeping mission.

He added that the history of pending allegations involving the Gabonese contingent in the country was also considered.

“Gabon has been formally notified of the secretariat’s decision. The mission also dispatched an immediate response team to the location to assess the situation, establish prevention measures and raise awareness among communities on how to report sexual exploitation and abuse,” said Mr Dujarric.

He added, “The mission has referred the victims to humanitarian partners for medical, psychosocial and protection assistance, in line with our policies on support to victims of sexual exploitation and abuse.”

MINUSCA further noted in a statement that in line with the “UN’s global policy of assistance and support to victims of sexual exploitation or abuse by UN personnel or related staff, the identified victims received immediate care and support through mission partners.”

The UN Office of Internal Oversight Services (OIOS) has also opened an investigation and “stands ready to assist, should a national investigator be appointed.”

The decision was communicated to the Gabonese Government on Tuesday based on a Security Council resolution relating to troops.

The resolution stated that “in the face of instances of credible evidence of widespread and systemic sexual exploitation and abuse, or failures to take appropriate steps to investigate, hold perpetrators accountable, or keep the secretary-general informed of progress, the units of the Member-State should be replaced.”