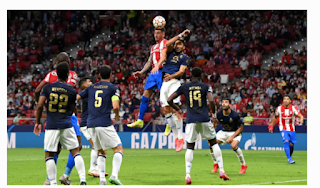 Atletico Madrid drew 0-0 at home to FC Porto in a cagey opening UEFA Champions League Group B game on Wednesday.

This was after the Spaniards were spared defeat when a Video Assistant Referee (VAR) review overturned a late goal from visiting striker Mehdi Taremi.

Taremi bundled the ball into the net in the 80th minute from the floor after a mix-up between Atletico Madrid defender Renan Lodi and goalkeeper Jan Oblak.

But the goal was ruled out as the Iranian forward had handled the ball as he slid to the ground.

Luis Suarez fizzed the resulting free-kick inches over the bar.

The Uruguayan had also gone close to breaking the deadlock late in the first half with a free-kick which cleared the wall but went narrowly above the bar.

Atletico Madrid suffered a first-half setback when Thomas Lemar was taken off with a muscle injury.

He had scored in the ninth minute of added time for the winning goal in the 2-1 victory at Espanyol on Saturday.

The visitors nearly took the lead early in the first half with a powerful cross from midfielder Otavio, which went beyond Oblak’s grasp and came off the post.

Simeone then made a triple change.

He brought on Griezmann. But it was another substitute in Angel Correa, who almost gave the hosts the lead, the Argentine forward driving a shot across goal, which FC Porto goalkeeper Diogo Costa beat away.

FC Porto showed a little more ambition in the latter stages and were aggrieved when Taremi’s goal was ruled out as the ball brushed against his arm just before it trickled across the line.

They had another opportunity to snatch the lead when a cross found Mbemba from close range, but the defender failed to make proper contact with the ball.