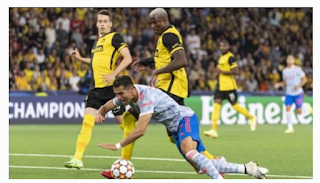 Cristiano Ronaldo has described Manchester United’s defeat to Young Boys in the UEFA Champions League opening game as an undesirable outcome, calling for recovery and focus on the next game.

The Red Devil were defeated 2-1 by the Swiss side on Tuesday.

“Wasn’t the result we wanted, Ronaldo said in a tweet after the game on Tuesday night. “But now it’s time to recover well and focus on the next game!”

But United lost control of the game moments after Wan-Bissaka got a red card for a bad tackle on Christopher Martins.

With United reduced to 10 men, Young Boys took control of the game, with Cameroon’s Nicolas Ngamaleu netting an equaliser in the 66th minute.

Theoson Siebatcheu latched onto Jesse Lingard’s blind back pass to De Gea to score the winner for Young Boys in the 95th minute.