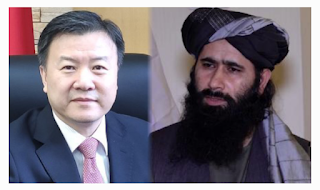 China has thrown its weight behind the newly formed interim Taliban government in Afghanistan.

“The Chinese ambassador congratulated the new Afghan government and added that China will continue to develop and strengthen humanitarian, economic cooperation and relations with Afghanistan,” Mr Naeem tweeted.