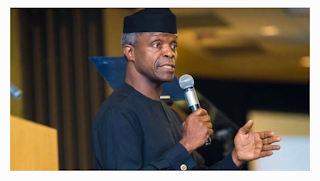 Mr Osinbajo said this on Saturday at an award ceremony organised by the Christian Association of Nigeria (CAN) for leaders in government and other notable achievers.

The vice president reckons that while their offices make it easy to be recognised for honour, awardees are not the most deserving of Christians.

He noted that there those working “daily in different locations, distant and near, to propagate this message of the love and reconciliation of the gospel of Jesus Christ.”

The award also belonged “to many who have suffered deprivations, the families of those who have lost their lives by reason of their belief,” Mr Osinbajo declared on the night.

The awards were part of activities for CAN’s 45th Anniversary Sapphire Celebration Dinner and Award Night.

Aside Mr Osinbajo, leaders such as former Nigerian leaders, Yakubu Gowon, Olusegun Obasanjo and Goodluck Jonathan were conferred with awards.

Among serving members of government honoured were Deputy President of the Senate, Ovie Omo-Agege, Secretary to the Government of the Federation, Boss Mustapha and some Christian governors.

The vice-president said CAN has been a veritable force for peace, unity and social justice in the country, while registering “the very warm felicitations of the President Muhammadu Buhari and the Federal Government of Nigeria” on the body’s 45th anniversary.

CAN National President, Reverend Samson Ayokunle, in his own speech said the award ceremony was “an applause of vision and personal discipline” of Christians in politics who had shown excellent and remarkable services.

“The award is a catalyst that is expected to reinforce the awardees to serve humanity more and more,’’ he said.

The CAN president said it was heartbreaking that the majority of those in Internally Displaced Persons (IDPs) camps were Christians who were displaced by religious fanatics, bandits and gunmen in their territories.

He solicited the awardees’ financial support in fulfilling some of CAN’s obligations to fellow Christians and bringing to fruition the association’s projects.

Abubakar Abdullahi, an Imam, who sheltered no fewer than 200 Christians in Barkin Ladi, Plateau, during an attack, was presented with the Special Recognition award.

The late Obadiah Mailafia, former CBN deputy governor, was given a posthumous award of Spokesperson for Oppressed alongside Matthew Kukah, Bishop of Catholic Diocese of Sokoto and Human Rights Lawyer, Femi Falana.

Awards were also given to best candidates in the 2020 Unified Tertiary Matriculation Examination and Senior School Certificate Examination.