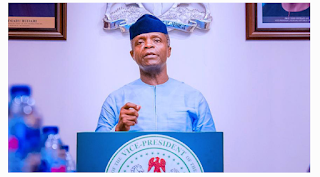 Vice President Yemi Osinbajo says efforts were currently underway to limit the development of gas projects in Africa, violating the principles of equity and justice enshrined in global agreements.

“But worse, we are being compelled to make disproportionately huge sacrifices as the wealthier countries continue full speed on defunding gas projects and insisting that gas projects must be defunded as an important component of the drive towards net-zero emissions by 2030,” said Nigeria’s vice president.

Mr Osinbajo said much of the global investment in clean energy would need to go into Africa, advising that efforts be made to redirect global capital to the continent.

He made the assertion at a virtual conference jointly hosted by the International Crisis Group, the Royal African Society, and Africa Confidential, said his media aide Laolu Akande.

Mr Osinbajo had, at different forums, raised the issue of financing of gas projects in developing countries, like Nigeria, advocating for a just transition and more effective engagements towards the target of net-zero emission by 2050.

“Because of the role of gas as a bridge fuel, to increase the share of renewable energy in the energy mix, and rapidly transit away from firewood-based cooking fuel to natural gas-based cooking, yields both environmental and health benefits,” Mr Osinbajo further explained. “We continue to be the most adversely impacted by climate change, so much so that public resources that could help modernise the energy mix has to be redirected towards adaptation spending.”