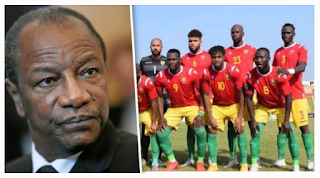 The decision to postpone the game followed Sunday’s coup d’etat in the West African country and the reported detention of President Alpha Conde.

“The current political and security situation in Guinea is quite volatile and is being closely monitored by FIFA and CAF,” said CAF in a statement late Sunday. “To ensure the safety and security of all players and to protect all match officials, FIFA and CAF have decided to postpone the FIFA World Cup 2022 qualifying match Guinea versus Morocco.”

It further explained that the match had “been scheduled to be hosted in Conakry, Guinea on Monday.”

It added that information about rescheduling the match would be made available at a later date.

Guinea soldiers on Sunday said they took control of the government and suspended the constitution.

In a video recorded in the capital Conakry, Colonel Mamady Doumbouya of the Guinea military stated that the National Assembly had been dissolved.

A video on social media showed Mr Conde held by soldiers. He was subsequently shoved into a vehicle and driven away.