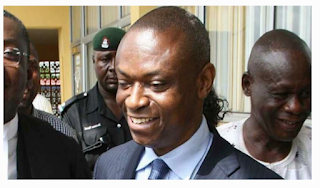 The Ikeja Division of the Lagos State High Court has ordered the confiscation of N19.1 billion assets and funds linked to Francis Atuche, the jailed MD of the defunct Bank PHB.

Making this disclosure in a statement on Thursday, the EFCC said that Justice Lateefat Okunnu gave the order on Tuesday following an ex-parte application filed by the anti-graft agency last month.

Ms Okunnu in her ruling ordered the freezing of all bank accounts personally or jointly operated by Mr Atuche.

The EFCC in its application alleged that the jailed bank MD used 22 firms and 15 persons including Ugo Anyanwu, a former chief financial officer of the bank, to launder the funds.

Ms Okunnu barred Mr Atuche, his lawyer and other privies from withdrawing funds from the affected accounts and other accounts linked to the jailed bank boss.

The court also gave the concerned banks 48 hours to bring before it, the statement of accounts of Mr Atuche and the firms he used in looting the funds.

Mr Atuche was in June sentenced to six years imprisonment after he was found guilty of stealing N25.7bn.

The judge while jailing the ex-bank MD ordered him and his accomplice to return the money they stole.