Court jails eighteen for not cleaning their environment - The Naija Weekly

Home News Court jails eighteen for not cleaning their environment

Court jails eighteen for not cleaning their environment 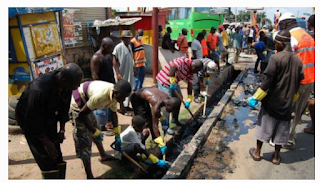 Eighteen persons have been convicted of violating environmental sanitation laws in Lafia, Nasarawa.

The judge of the mobile court handling environmental-related cases in the state, Abdullahi Lande, convicted and sentenced them to six months imprisonment each with an option of fine of between N5,000 and N50,000.

The prosecutor, Abubakar Mohammed, who is also a chief environment officer, told the court that the suspects were transacting their private businesses while the sanitation exercise was in progress.

He urged the court to sanction the culprits accordingly to serve as a deterrent to others.

Meanwhile, the permanent secretary of the Ministry of Environment and Natural Resources, Aliyu Agwai, lauded residents of the state for their compliance with Saturday’s sanitation exercise.

Mr Agwai added that despite the rainfall, a lot of residents cleaned their surroundings and shops as well as cleared drains around their environment.

He further called on members of the public to always keep their environment clean to guard against outbreak of diseases.

“Residents should cooperate more with the government towards ensuring that the state is clean in their best interest.

“If the environment is kept clean, it will guard against possible outbreak of any disease, thereby ensuring improved healthy living of the people,” he added.

Last Saturday of every month is set aside by the Nasarawa government for sanitation exercise.