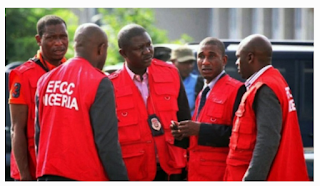 Anti-graft agency, Economic and Financial Crimes Commission, in a statement on Thursday disclosed that Mr Ogbonna used his company, Obyke System Consult Limited to obtain the sum of N45 million from Diamond Bank Plc by presenting false documents to the bank.

First arraigned in 2016, before Justice Oluwatoyin Ipaye of the Lagos State High Court, the case was struck out after efforts by the anti-graft agency to have him take his plea proved abortive.

However, he was re-arraigned in April 2019 by the EFCC on a five-count charge bordering on conspiracy and money laundering after the case was re-assigned to Justice Mojisola Dada.

The EFCC accused the retired captain of conspiring with his company to convert to personal use, the sum of forty-five million naira paid by the Central Bank in July 2015.

She ordered Mr Ogbonna to make restitution of N45 million to Diamond Bank Plc and also directed that the company be wound up and pay a fine of N5 million.