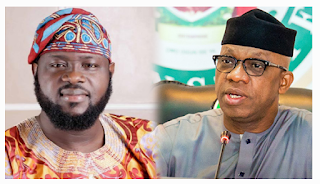 Justice Tijjani Garba Ringim of the Federal High Court sitting in Ikoyi, Lagos, on Tuesday, August 31, 2021, ordered the interim forfeiture of the funds as well as properties traced to the suspended aide to Governor Dapo Abiodun of Ogun State, Abidemi Rufai.

The forfeiture order covered Mr Rufai’s assets at House 11, Omodayo Awotuga Street, Bera Estate, Chevy View, Lekki, Lagos. His funds with Sterling and Zenith accounts were also frozen in the interim. Mr Rufai has been facing charges in the United States following his arrest by the FBI in May. The EFCC said a joint investigation with the FBI helped locate Mr Rufai’s assets in Nigeria.

Meanwhile, the Port Harcourt Zonal Commander of the Economic and Financial Crimes Commission, EFCC, Assistant Commander of the EFCC, ACE Aliyu Naibi has emphasised the need for increased information sharing among law enforcement agencies in Nigeria, stressing that it remains the most critical strength in security services.

He made this disclosure in his office in Port Harcourt, Rivers State on Tuesday, August 31, 2021, while receiving the Comptroller of Rivers Marine Command, Nigeria Immigration Service, Comptroller Helen Onwuzulike, who paid him a Courtesy Visit.

Also, Justice Obiora Atuegwu Egwata of the Federal High Court, Makurdi on Monday, August 30, 2021, convicted and sentenced one Oriri Peter Onu to two years imprisonment on a two-count charge of obtaining money under false pretences brought against him by Makurdi Zonal Command of the EFCC

The convict was prosecuted for using an electronic device to fraudulently re-direct electronic funds transfer instruction from Guaranty Trust Bank Plc into his account number 017199728 domiciled with the bank.