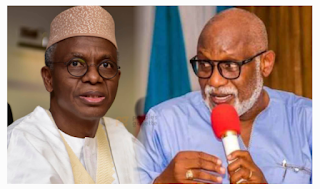 Governor Rotimi Akeredolu on Wednesday accused Governor Nasir El-Rufai of plotting to devastate southern parts of Nigeria by shipping armed bandits and killer herdsmen to undermine the law against open grazing of cattle now widely adopted by states across the region.

“It is a cleverly crafted path towards replicating in the South, the most despicable situation in the North that Nigerians of goodwill daily pray to overcome,” the Ondo governor said in a statement. “It is a ploy beyond the ordinary.”

Mr Akeredolu was pushing back against Mr El-Rufai’s comments on Tuesday, in which the Kaduna governor excoriated southern governors as playing to the gallery by instituting laws banning armed herdsmen of predominantly northern Fulani origin from openly grazing their livestock.

Mr El-Rufai, who spoke at an economic policy event organised by Vice President Yemi Osinbajo at the State House, Abuja, said southern governors know they cannot enforce a ban on open grazing and should stop their populist efforts.

“What is unhelpful is the politicising of the situation with legislation that you know that you cannot implement,” Mr El-Rufai said. “It is not a matter of populist legislation or saying tomorrow this or that.”

The comments elicited widespread outrage from southern states, and Mr Akeredolu, as the chairman of southern governors, quickly fired back at his Kaduna counterpart, saying his comments bore the markings of a call to anarchy.

“For emphasis, any such comment like that of the Kaduna governor, if indeed he made that statement, merely seeks to encourage anarchy under the guise ‘of resentment of a law by affected stakeholders,’, Mr Akeredolu said in a statement signed by his information commissioner Donald Ojogo. “From all indications, Governor el-Rufai, if he was properly quoted and his views not misrepresented, is struggling hard to export banditry to the South under an expressed opinion that is laced with mischief.

“Perhaps, it is apt to state clearly that the likes of Governor El-Rufai are already in a hysteric ‘mode’ of escalating and indeed, externalising banditry, especially as the military onslaught against criminal elements and other terror variants suffices in the North,” the statement added.

Mr Akeredolu said southern states, especially Ondo, will not back down on anti-open grazing legislation to assuage northern interests like Mr El-Rufai.

“The anti-grazing law, especially in Ondo State, has come to stay,” he said. “It shall be zealously guarded and conscionably deployed to protect all residents of the state, notwithstanding their ethnic and religious biases.

A spokesman for Mr El-Rufai did not return a request seeking comments.

Southern states like Benue, Ebonyi, Akwa Ibom, Ogun, Ondo, Lagos, Ekiti have all passed legislation to curb nomadic herdsmen, who have been blamed for killing thousands of villagers across the region in a push to seize fertile lands. Northern politicians, however, argued that passing a law to restrict the movement of Fulani citizens was a violation of the Nigerian Constitution that guarantees the fundamental rights of all citizens to move and live anywhere within the country’s borders.